Quentin Vlamynck (FRA) on Arkema and Sam Goodchild (GBR) on Leyton are locked into a duel as the fleet passes the west of the Scilly Isles in a 10-15 knot NNE breeze. The fleet is spread out, but only 4nm separate leading boat Arkema from Leyton!

Separated by one point in the provisional overall ranking, both Ocean Fifty teams are in the running for the 2022 Pro Sailing Tour title. By 13:00 on Saturday, the outcome will be clear.

Eric Péron (Komilfo) passed the Fastnet last night at around 23:30. Lying in 5th place and wrestling with the very variable sailing conditions along the Irish coast, he nonetheless found the time to send a voice message: “We have just passed the Fastnet with difficulty because there was a light patch. We lost more ground, we made a lot of mistakes, we thought we were going to make some good moves, but we’re behind. We’re doing our best and we’re hoping for a Trafalgar at the tip of Brittany, but given the weather forecast I’m not sure that’s going to happen. The morale is good, the boat is fine. A sunfish got stuck in the rudder, but we managed to get it out!”
They are currently positioned West of the Scilly Isles.

Next the fleet must reach the Birvideaux lighthouse between Groix and Belle-Île, and from there sailing round Brittany will offer more strategic opportunities with currents, thermal effects and rocks that could shake up the overall positions.

Koesio is still in the hunt 13 miles behind Arkema and 9 miles behind Leyton. 24 hours of suspense lie ahead! 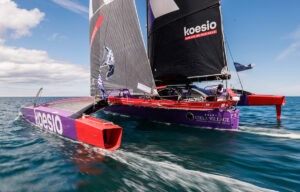 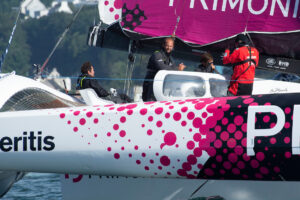