Offshore sailing’s most exciting new competition arrived in Cowes this morning when a delighted Sam Goodchild crossed the Cowes finish line onboard Leyton to the sound of the Royal Yacht Squadron cannon after a hard-fought 515nm offshore battle from Saint-Quay-Portrieux in Brittany that started on Sunday.

“The race along the Solent, the gun, the finish with Leyton, it was beautiful!” said Sam Goodchild shortly after the finish this morning. “Being here brings back a lot of memories, as my career as an ocean racer with Team Artemis started here in Cowes.”

After 38 hours at sea the top three finishers arrived within 30 minutes of one another, but line honours were not enough to secure the Episode 3 podium for Goodchild. It was the youngest skipper in the fleet, Quentin Vlamynck onboard Arkema, who having won 4 out of the 6 inshore races on Friday and Saturday last week in the Bay of Saint-Brieuc (the first half of Episode 3), who won this highly technical stage. Erwan Le Roux on Koesio finished second just 25 minutes adrift and continuing his upward trend.

In the match race up to Portsall and on the way back up the Channel, Thibaut Vauchel-Camus on Solidaires En Peloton – ARSEP, and Eric Peron on Komilfo ,fell behind their rival Ocean Fifty teams overnight. And while at Portland Bill only 22nm separated Thibaut Vauchel-Camus from leader Leyton, the rich got richer with those at the back of the fleet feeling the effects of a slackening breeze and increasing tide in the Solent.

Welcomed by Gary Hall CEO of Cowes Harbour Commission at Cowes Harbour Commission, Ed Walker the Harbour Master of Cowes, Martin Thomas the Commodore of the Royal London Yacht Club and Rodney Barton the Trustee of the Royal London Yacht Club, the crews felt immediately at home at the heart of British yachting and were looking forward to recharging before the festivities tomorrow which will include the Episode 3 prize-giving.

Everything comes down to the Final Rush which will start tomorrow at 19:00 CET and will take the fleet from Cowes to Roscoff via the Fastnet Rock.

Who will be crowned the Pro Sailing Tour champion 2022?

Order of finish of the Offshore Challenge in Cowes 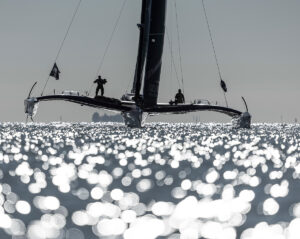 Pro Sailing Tour outcome all down to the Final Rush 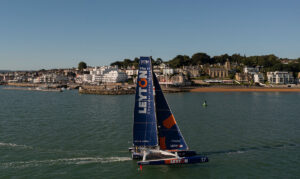