Sébastien Rogues’ Ocean Fifty is currently undergoing repairs at the Fiber Mechanics yard in Cowes after running aground in the Solent and es expected to be back in the water next week in time to compete in the Drheam Cup. “This is great news! I would like to stress that we have met some great people, very professional, a big thank you to them” said the skipper of Primonial.

Group GCA-1001 Sourires at anchor in the Scilly Isles
Gilles Lamiré’s crew member, who was reached by phone, explains how the dismasting happened: “It was around 7am, the conditions were quite good, with 15-17 knots of wind, we were doing around 20 knots and back in the game. A piece broke at the top of the forestay of J1 (headsail) and the mast fell backwards slowly and broke into 3 pieces. It was a stainless steel ring that broke due to a manufacturing defect. It’s an unpredictable thing that nobody can anticipate. The icing on the cake is that the engine, which is new, didn’t start, so we had to call the rescue service to come and get us. At the moment we are anchored in front of St Mary’s harbour waiting for a mechanic. We plan to leave tomorrow morning for Saint-Malo under motor. 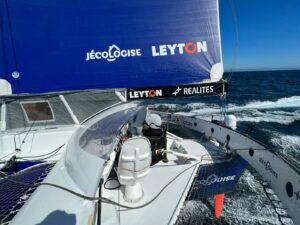 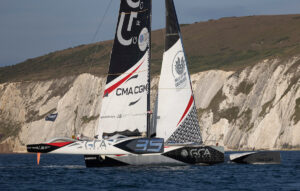