Pro Sailing Tour outcome all down to the Final Rush

After two months of high-intensity competition that has taken seven talented Ocean Fifty trimaran skippers from the Mediterranean to France’s Atlantic coast, and then on to Cowes on the Isle of Wight, the outcome of the 2022 Pro Sailing Tour will be decided in what is dubbed the ‘Final Rush’.

The concluding contest will take the fleet of ultra-high-performance foiling multihulls on a challenging 950 nm course from Cowes along the south coast of England, past the Isles of Scilly and across the Celtic Sea to the famed Fastnet Rock, then further up the coast of Ireland and round Great Skelling and the evocatively named Washerwoman Rock. Then it’s past a virtual waypoint some 70km west of Brittany, followed by a mark off Lorient, and back up around Brittany’s rugged coastline to the finish in Roscoff. It’s a suitably testing finale to what has been a closely-fought contest that started in Bonifacio, Corsica, back in May, followed by further events – known as Episodes – in Brest and the Bay of St. Brieuc in France. With the recent race to Cowes – in which defending Pro Sailing Tour champion Sam Goodchild (GBR) on Leyton took line honours – concluding Episode 3, all now depends on the outcome of Episode 4’s Final Rush to Roscoff. “It is going to be intense, the course has it all, rocks, tides, and the wind is not forecast to be very strong, so it will be very strategic,” said Sam Goodchild, skipper of Leyton, just before the start. “We are very happy to have taken line honours on this last offshore leg, but we also saw that the whole fleet has taken a big step up and we will have to hold our nerve! We are motivated to do well.” Heading into the decider it could hardly be closer with Quentin Vlamynck (FRA) on Arkema – winner of Episode 3 – holding a single point lead over Goodchild, while Erwan Le Roux (FRA) on Koesio remains within striking distance. Meanwhile Eric Peron (FRA) on Komilfo, Thibaut Vauchel-Camus (FRA) on Solidaires En Peloton-ARSEP, and Gilles Lamiré (FRA) on Groupe GCA-1001 Sourires, are all determined to sign off the season in style. “We’ve managed to rest a little bit and we’re ready to go again,” said Quentin Vlamynck, skipper of Arkema. “Our goal is clear, to win, to finish well and to win. We have the boat to do the job, we have the right crew, we must stay concentrated and keep our foot down.”

Bon Départ for the Final Rush from Cowes 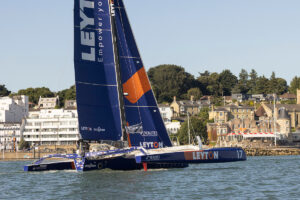