Who will challenge Sam Goodchild ?

With just two weeks to go to the start of the Pro Sailing Tour season 2 (12 May-10 July), one of ocean racing’s most exciting new competitions, a multinational fleet of seven foiling trimarans (the eighth will join in Brest) and 50 of the best offshore sailors will soon be converging on Bonifacio in Corsica for Episode 1 of the 4 Episode season.

An exciting new course, with inshore and offshore competition, will take the show from Corsica to Brittany via Cowes in the south of England. The Pro Sailing Tour 2022 – renowned for its intensity and boat-on-boat battles – is shaping up to be a highly competitive and exciting two-months of hard-fought racing.

“There is a lot of appetite and enthusiasm for the start of this new season,” said Julien Mauriat, CEO of the Pro Sailing Tour and one of the masterminds behind the revealing and highly engaging Ocean Fifty TV series that puts viewers onboard in the thick of the action. Each Ocean 50 has its own dedicated onboard reporter capturing the adventures of each team as they unfold, the resulting footage is raw, inspiring, and entertaining, and is broadcast to fifty channels globally. In France, season 1 will show on Canal+ from May. “While most reports dedicated to sport focus solely on the sporting aspects, the production of the Ocean Fifty series has the particularity of being interested in the human adventure and the raw and spontaneous emotions”, explained Julien Mauriat. 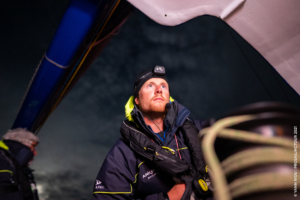 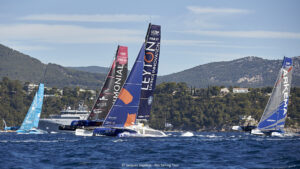